Wisconsin v. Yoder at 50: What You Need to Know If You Care About Learning

Let our intern take you on a quick dive into the facts of the 1972 landmark Yoder case, where she'll explain key legal terms and introduce you to the main characters and their roles. 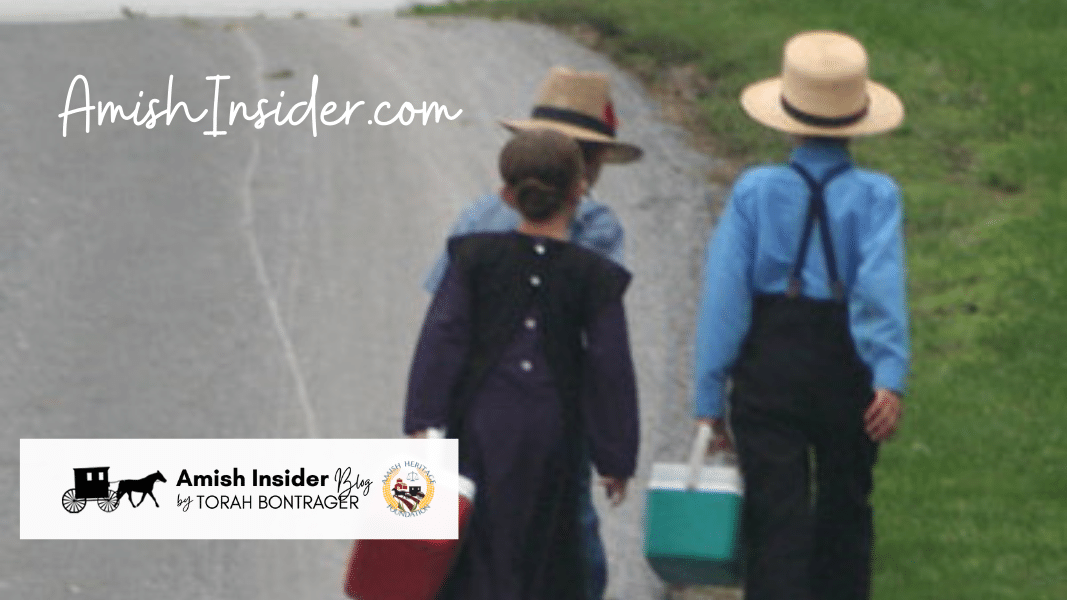 An Amish girl and two Amish boys under the age of 10 carry lunchboxes on their walk home from school. The girl is barefoot; the boys are wearing shoes.

NOTE: If you haven’t read the first introductory blog post in this series, you can do so here: “Wisconsin v. Yoder at 50: What You Need to Know — Protect Yourself & Amish Women“!

Now that you know a little more about Amish people, culture, and religion, we can dive deeper into the facts of the 1972 landmark Wisconsin v. Yoder US Supreme Court case itself and why it is so relevant for today’s society.

In this case, the petitioner was the State of Wisconsin (“Wisconsin” in Wisconsin v. Yoder). The three respondents, encapsulated by “Yoder”, were Jonas Yoder and Wallace Miller (traditional Amish) and Adin Yutzy (Beachy Amish aka Conservative Amish-Mennonite Church). The advocate for Wisconsin was John W. Calhoun; the advocate for Yoder et al. was William B. Ball. The Chief Justice of the Supreme Court at the time was Warren E. Burger, who also . . .

The question that the Supreme Court was faced with answering was whether Wisconsin’s compulsory education law for children up to age 16 violated the First Amendment. It was a potential violation of the Constitution because it criminalized the behavior of Yoder, Miller, and Yutzy when they refused to send their children to school on the basis that it violated their religious beliefs.

The First Amendment is twofold when it comes to religion. The first of these is the Establishment Clause. This upholds the separation of church and state, and states that “Congress shall make no law respecting an establishment of religion”. The second is the Free Exercise Clause, which “protects citizens’ right to practice their religion…so long as [it] does not run afoul of a ‘public morals’ or a ‘compelling’ governmental interest” (emphasis added). For historical reference, the Supreme Court had restricted the freedom to act upon a belief before Wisconsin v. Yoder (see Reynolds v. United States (1879) and Cantwell v. Connecticut (1940)), but the freedom to believe itself cannot be infringed upon.

Calhoun, the advocate for Wisconsin, agrees that the case involves a parent’s religious freedom to raise their children as they believe God tells them to: “God dictates in an infinite variety of ways, [so] this makes for a thoroughly broad issue.” But he also emphasizes to Associate Justice William J. Brennan Jr. that “first we are concerned about the rights of the child to an education” and “the interest of the child in education is important.” Unlike previous cases like Sherbert v. Verner (1963)—in which the denial of unemployment compensation due to religious practices violated the First and Fourteenth Amendments—Calhoun maintains firmly that in the current case, “This is a positive force that we are dealing with for the benefit of society.” In the eyes of the state, the case was not only about religious freedom, but about children’s rights (although as demonstrated by the oral hearing, Calhoun did not seem to be interested in actually advocating for the children’s rights and winning the case despite the state’s position on the matter).

Part of Ball’s argument on behalf of the Amish respondents is that requiring the Amish children in question, specifically naming Frieda Yoder and Barbara Miller, to attend school for a few months or “at most two years of high school” would not benefit the public interest. Yet this is very specific to the children of Yoder, Miller, and Yutzy. What about children (Amish or not) at some arbitrary younger age who are not guaranteed an education at all — or even less than a rudimentary eighth grade — if their parents refuse on behalf of their religious beliefs?

Much like Torah Bontrager, the founder of the Amish Heritage Foundation, and others like Marci Hamilton have argued, Calhoun also tells the Court that “there is a correlation…between compulsory education and compulsory school attendance and the child labor laws.” The Amish, fundamentally, refuse to send their children to secondary school because they want free child labor.

Ultimately, the final ruling of the Court was that under the First Amendment’s Free Exercise Clause, the Wisconsin law that required children to attend school until age 16 was unconstitutional since it violates the parents’ right to direct the religious upbringing of their children. That ruling was unconstitutional, according to the Amish Heritage Foundation and legal experts such as Hamilton, who are not biased (or can set aside their biases) toward religion and parents’ rights at the expense of children’s rights and best interests.

Come back to this blog next week for the final post in this series to learn more about how Wisconsin v. Yoder has affected policy and public opinion 50 years on.

To education,
E.P., Intern for the Amish Heritage Foundation

Why Is Ignorance Bliss When Filming the “Realities” of Amish Life?

Happy Independence Day? For Whom? 100s of 1000s of Amish American Kids Suffer

5 Interesting Things About Christmas That Will Surprise You

How to Make Your Visit to Amish Country More Rewarding