This was a period of dramatic cultural shifts, in which the “Greatest Generation” had to deal with the reality of a huge cohort of baby boomers coming of age and questioning the way that things had always been done. Music was getting more sexual and less concerned with promoting gender roles and leaders were being proven fallible. 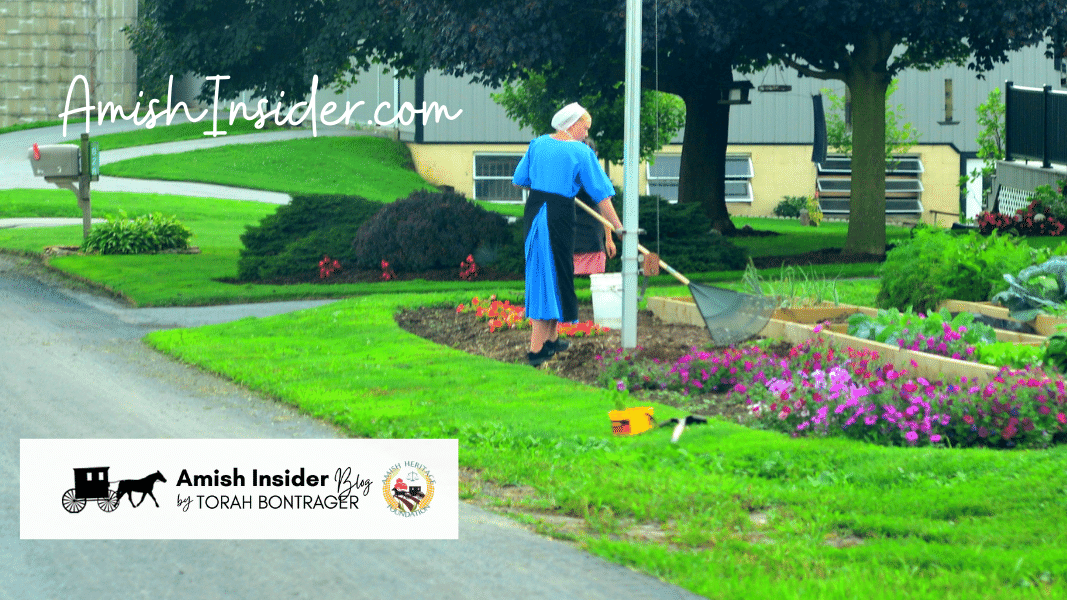 An Amish woman, likely from Lancaster, PA based on her clothing style, is gardening.

The Amish: A People of Preservation is a PBS documentary that came out in 1975, three years after the landmark case Wisconsin v. Yoder decided that the Amish were under no legal obligation to educate their children past the 8th grade.

However, these were not the only events taking place in 1974. But based on the film, you would think we were still living in . . .

For my critique of the film, see my post Can We Please Talk About Gender? The Amish: A People of Preservation.

If you’d like to see the film, instead of renting or buying it, please consider donating that amount to the Amish Heritage Foundation and watching the film for free on YouTube.

Quotes from The Amish: A People of Preservation

For the CliffsNotes of the film, here is a list of quotes to enjoy:

In order to explain why a highly one-note, romanticized portrayal of a very conservative religious sect gained acclaim in 1975, let’s look at some of what was happening in 1974:

This was a period of dramatic cultural shifts, in which the “Greatest Generation” had to deal with the reality of a huge cohort of baby boomers coming of age and questioning the way that things had always been done. Music was getting more sexual and less concerned with promoting gender roles and leaders were being proven fallible. Meanwhile, the economic boom of the postwar era was starting to crash, and second wave feminism was threatening conceptions of how society should operate.

The myth presented in The Amish: A People of Preservation is a warm safety blanket for adults terrified by the changes buffeting them from all directions.

The documentary — which isn’t actually a documentary and instead is a propaganda film* — argues that resisting change is not just possible, but laudable, that a man can exercise control over his family, his home, and his world in order to accept only the amount of progress that he deems beneficial.

* “. . . Propaganda hides it’s true intent, inventing fictional realities while pretending to be nonfiction.” by James R. Martin in the article “The Difference Betweent Documentary and Propaganda“.

While complicated by concerns over expansions in Lancaster, Pennsylvania, the documentary never questions that there could be anything underneath the peaceful platitudes espoused by Amish scholars.

The documentary fails to consider whether the average education level of the Amish population — almost all of whom only ever attend poorly run and low-performing Amish schools and even then, only up until the 8th grade — might make it appear to outsiders that Amish women don’t consider women’s liberation relevant for their lives. Most Amish women and girls won’t even know what women’s liberation is or what exactly it means, if they’ve run across the reference or concept.

Outside of one moment, the inner lives of women are entirely absent from the discussions presented in the documentary. (That moment was on consciousness raising as a practice, not a spontaneous phenomenon that happened in a vacuum without other women able to speak openly about their experiences. But that isn’t a universal Amish practice, which the documentary of course fails to be truthful about.)

The Amish: A People of Preservation is concerned with the motivations and feelings of Amish fathers with no regard for any of the other members of the family. Community building takes place in the field, not in the kitchen or in sewing circles or any other spaces in which women can meet.

The image of what an Amish father fears most is young girls in shorts, participating in that scandalous activity, colorguard. The image of teenage rebellion is not smoking, or drinking, or even extramarital sex, but young women practicing a sport in athletic clothing, though the image is certainly meant to stand in for all of these underlying fears.

The Amish: A People of Preservation illuminates far less about the Amish than it does about what outsiders want to believe and what some people were afraid of in 1975.