Can We Please Talk About Gender? “The Amish: A People of Preservation”

A central message of the film is that wanting rights for practicing Amish women and girls is an attack on the faith, but taking away their rights is just religious freedom. 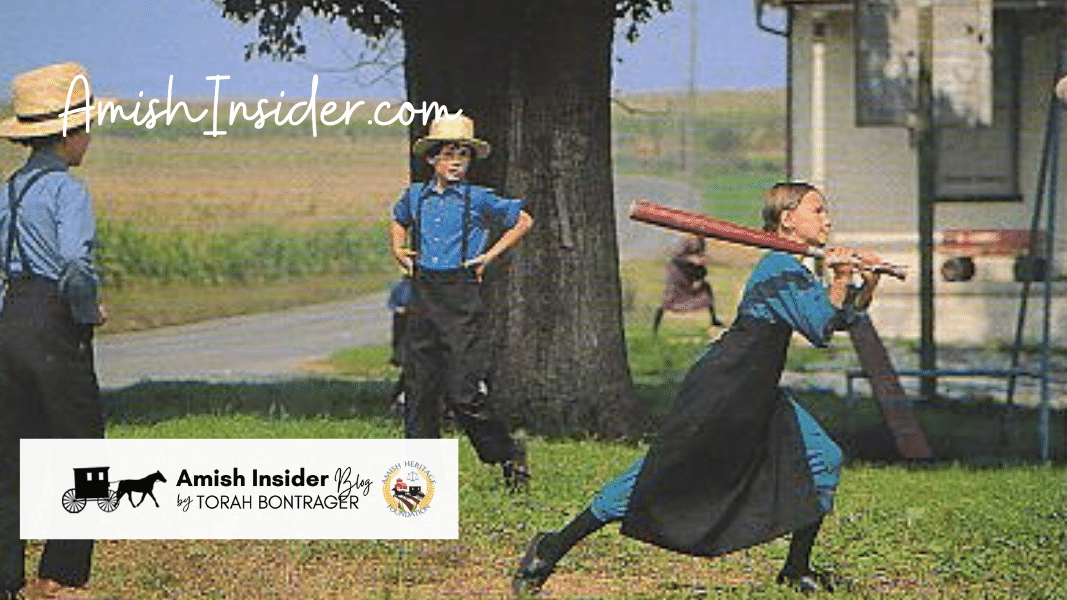 Amish children, both boys and girls, play softball during recess at an Amish-only school in Pennsylvania.

Our ideas about gender have changed dramatically since the so-called documentary The Amish: A People of Preservation aired on PBS in 1975 to great critical acclaim. That response, by the way, helped to ensure that the human and civil rights violations committed against Amish women and children by the religious patriarchy continued to flourish.

The re-released version from 2000 should have more closely resembled our then-current ideas about gender and family life. But we should hardly be surprised: after all, The Amish is a propaganda film by a Religious Right all-male cast and crew, lorded over by a Mennonite minister who not only wrote the script, but also produced the film and starred in it, too. NOTE: Instead of renting or buying the film, please consider donating that amount to the Amish Heritage Foundation and watching the film for free on YouTube.

For example, here are several critical trends that took place in the US from 1975 to 2000:

Unfortunately, if all you had to measure the passage of time from 1975 to 2000 was this documentary, you would think that nothing changed. There is something to be said for the way that using 25-year-old footage with few updates perpetuates the myth that nothing ever changes among the practicing Amish, that there are no geographic variations and spectrums of conservatism or adjustments made due to changing economic conditions or political dynamics.

It is far more comforting for the outsider if the Amish remain a monolithic remnant of the past, with no responsibility for or contribution to the present as anything other than a tourist attraction.

If the Amish do not really live in our time, then they do not need to adhere to our understandings of morality or rights. They get a pass, based on the “it’s just how it’s done” principle.

Part of the reason that this still flies is that the Amish are not required to go to school past the 8th grade, resulting in English scores at the 5th grade level and math scores at the 3rd/4th. The Amish: A Picture of Preservation describes this using idyllic romanticized notions of a one-room schoolhouse, calling on ideas of nostalgia and protecting our past with fondness. Unfortunately, the fact that young women are shepherded into fulfilling the role of teacher, despite only receiving a grade school education, is not examined with a critical perspective. Neither is the idea that young men choose who they will date, with women never being permitted to approach a man. Nor is the possibility of a woman turning a man down ever explored.

The updated 2000 version of this documentary is clearly responding to the mild criticism the original documentary garnered: that it gave more attention to the personality of horses than to the inner lives of Amish women. The 1975 version jumped at the chance to use the image of young non-Amish women in shorts as a scary symbol, representing the immorality of modern life. However, none of the “experts” interviewed were women. Shocker.

It is understandable that no practicing Amish women spoke on camera; that would contradict the patriarchal norms of women becoming their husband’s property, in addition to violating religious prohibitions about photographs. But there is no reason why the makers of this film could not have interviewed a nonpracticing Amish woman to talk about her childhood. One of the key experts that they rely on is a man who left the Amish Church, joined the Mennonite Church, and earned his PhD, but who does not advocate for Amish women’s rights, representation, and education.

It appears that the all-male crew were afraid that a woman’s account would contradict their narrative of an idyllic, nurturing childhood: a false narrative that included children being taught how to seriously examine the pros and cons of leaving the Church with the full support and love from their parents, community, and clergy to make a decision freely, fairly, and without a lifetime of punishment if they did not want to practice the religion. And let’s not forget, a childhood that included all children being fine with leaving school at age 13 or 14, or never once in their lives afterward experiencing the negative impact of having been forced to stop learning.

Perhaps the most egregious example of this educational deprivation is the way in which the “documentary” acknowledges that changes do occur among the Amish. For example, men are allowed to upgrade their education in technology in order to remain economically viable––to keep earning an income. But any technology that would reduce the demand for child labor on the farm (and in other Church-approved occupations) and allow children to continue their education beyond the Amish 8th grade is sinful. So sinful, in fact, that it is worse than raping children. Every year, tens of thousands of children and women are routinely sexually violated within the practicing Amish population, but never has a child been allowed to attain their high school and college degrees inside the Church.

Changes that would give women and children more rights and knowledge, just even their basic civil rights as American citizens, are not okay. I wonder why . . . .