Amish dolls have no faces. No eyes, no nose, no mouth, no fingers, no toes. 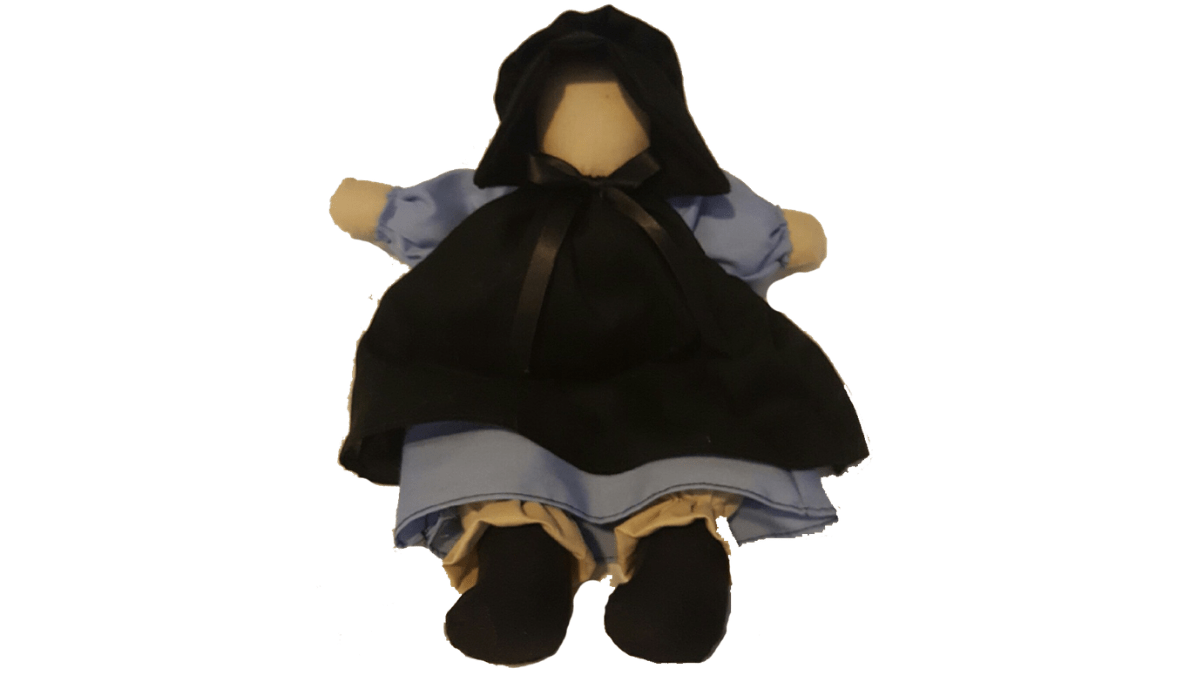 I spotted it after church services were over. Laura was playing with it. The white miniature-sized, plastic English doll with delicate features looked so pretty. I admired its tiny, beautiful brows with open eyes, its dainty nose and lips, and its cute defined hands and feet, the tiny fingers and curly toes. She was exotic, a non-Amish doll dressed in proportionately scaled-down Amish clothes—the first time I saw an English one in our clothes.

I played with a set of white cloth twin Amish dolls. My mother had crafted them from scratch when I was too young to remember. They were about twelve inches tall and outfitted in a matching set of dark brown clothes: a dress and black Amish cap for the girl, and a shirt and black pants for the boy.

The dolls had no faces. No eyes, no nose, no mouth, no fingers, no toes. Featureless shapes denoted the head, hands, and feet.

“Mom, look. I want a doll like that.” I dragged my mother’s attention away from the church women she was visiting with.

My mother pressed her lips together. “No, it’s zu hoch.”

Zu hoch meant “too prideful” or “too arrogant.” Hoch also referred to all non-Amish, non-Anabaptist people: die hoche leht. “The prideful, arrogant people.” Er is hoch gah. “He left the church and joined the English.” It was a sin to be hoch.

“But Laura and Mandy have one. Why can’t I have one, too?”

My mother’s forehead creased and her body stiffened. “Heich mich!” That meant “Obey me and stop questioning or I’ll spank you.”

Laura and Mandy’s parents are so nice to them. Someday I’ll have an English doll like that. “Can I play with your dolle?” I asked Laura.

“Yes.” Laura smiled and gave me a turn.

Later that year, after begging often enough for the little English doll, my father ordered my mother to buy one for me. My mother was upset that my father had taken my side. She threw away the doll’s English clothes but refused to make Amish clothes for her. So, at eight years old, I taught myself how to measure and cut material from scraps that my mother tossed into the wastebasket when she was sewing. I didn’t know how to make separate pieces for the arms and upper and lower parts of the body. So I made a cloak for my precious English doll—a cloak with a hood like Little Red Riding Hood’s—and fastened it shut with a safety pin that I found in my mother’s sewing drawer. I named her Guinevere, like King Arthur’s queen.

On rainy days, I spent many hours in the attic playing with her and telling her the fairy tales that I’d memorized. Whenever I heard a new name that I liked from the books I read, I changed Guinevere’s. All my Amish dolls assumed fluid monikers, too. I never had enough dolls for the long list of enchanting names I liked and made up.

A few years later, my parents moved from Wisconsin to Michigan. My Guinevere caused a scandalous uproar. The community in Michigan was far more modern in terms of material possessions. They allowed indoor bathrooms, phones in the barn, gas-fuelled generators, air-powered tools, and bicycles. But a doll with a face. . . . That was impetuous, too English, too hoch. “Thou shalt not make unto thee any graven image” meant having neither photos of our faces nor faces on our dolls. Even drawing eyes, a nose, and a mouth on the blank white blob, as I had once done, turned the toy into a forbidden idol.

“You can’t take your doll to church anymore,” my mother said. “It’s against the rules.”

“Get rid of the doll,” my father said. He sat at the table eating homemade popcorn after church and barely looked away from the article he was reading.

“Can I keep her and just play with her at home? I won’t tell anyone I have her.”

The stony silent glare on my father’s face warned me not to say anything more.

You were the one who said I could have her and you break the rules all the time, I thought. Why can’t I keep her? My bottom lip stuck out and my shoulders drooped. I hoped my expression would change his mind.

My father slammed his magazine shut, shoved back his chair, and shot his full attention onto me. “Where is that doll? Go get it.”

Why does he want her? I wondered as I brought her down the stairs from my room.

“Give it to me.” He yanked Guinevere out of my hands and stomped to the kitchen. Then he threw her in a trash bag and burned her behind the barn.

*This is an excerpt from the memoir Amish Girl in Manhattan. You can get a free chapter here.

What Is Freedom and Why Is It Important? Here Are 3 Answers

Is Christianity More of a Culture or a Religion in the United States?

How Gardening Can Help You Successfully Manage Post-Traumatic Stress